The Nighthawks-All You Gotta Do 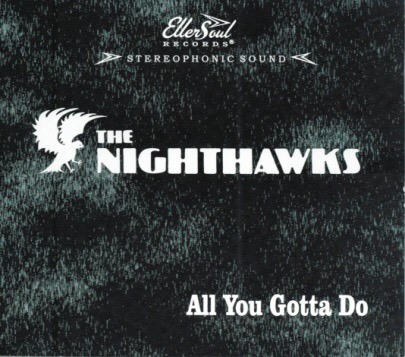 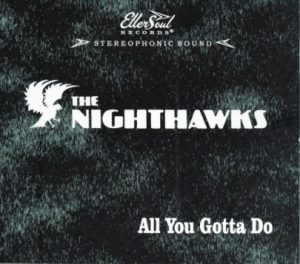 All You Gotta Do Hi-Res CoverBlues Music Award-Winning Band, The Nighthawks, Display Their Versatility on New CD, All You Gotta Do, Coming July 21 on EllerSoul Records

WASHINGTON, DC – Legendary blues and roots band (and Blues Music Award winners) The Nighthawks, announce a July 21 release date for their new CD, All You Gotta Do.

The band is also enjoying critical acclaim for Michael Streissguth’s award-winning documentary film about their history, The Nighthawks – On the Blue Highway, which is now available on DVD from the group’s website, as well as Amazon.com. The film will also be screened prior to the ‘Hawks’ June 30 performance at the Creative Alliance at the Patterson in Baltimore.

Eclectic? All over the map? The material on All You Gotta Do, The Nighthawks’ latest release, can certainly be described in these terms. Yet, throughout the nearly five decades of its career, the band has sourced songs from everywhere and anywhere. The prototype recording, Rock and Roll, although it had no originals, established this template in 1974. Three years later, Sidepocket Shot, showed the band capable of nearly all original material and spanning an even wider range of genres, this time in an array of production styles a la the Beatles’ Revolver. All You Gotta Do does not have any outside players, only the band itself, with a minimum of overdubs. Yet the band still sounds like a hard Chicago Blues band from the mid-1950s, adding the vocal harmonies that Miss Honey Piazza once dubbed “the Doo Wop Blues.”

The new disc opens with Mark Wenner’s rocking version of Brenda Lee’s title track, the kind of pop rockabilly that was in full swing at the end of the ‘50s. Mark Stutso proceeds to give a moving interpretation of Levon Helm’s personal farewell, “When I Go Away.” Wenner follows with the always mandatory Muddy Waters song, with no attempt to be anything other than the Chicago Blues.

Randy Newman’s “Burn Down the Cornfield” was learned by the band for a D.C. multi-band performance of his songs for band house gigs. Johnny Castle steps into the fray with “Another Day” that can only be described as a modern day protest piece from his own pen, and Stutso follows with his own tale of the tortures of love with “Voo Doo Doll.” Wenner gives a thumping take on the Sonny Boy Williamson rocker, “Ninety Nine,” using the big C 12 hole Marine Band harmonica honking in the lower register. The heart-wrenching ballad, “Three Times Your Fool,” gleaned from his solo CD and written with his Pittsburgh collaborator, Norman Nardini, is sung as only Mark Stutso can.

Mark Wenner got a chance to sit in on Jesse Winchester’s “Isn’t That So” at a casual jam. Remembering almost all the lyrics, he tried singing it. At the next Hawks’ sound check, the harmonies fell right into place and it became a part of the repertoire. The band takes a fun romp of R.L. Burnside’s “Snake Drive,” changing the groove from Hill Country Mississippi to D.C. Go Go, followed by a funny take on “Frere Jacques,” titled “Blues for Brother John.” This melody is one that Wenner uses to teach precise note bending in cross harp position. The final track shows off Johnny Castle, for all the styles he has played, to be the true King of Garage Rock in his salute to Washington D.C. on “Dirty Water.”

Although he sings no lead, Paul Bell is a major voice in the harmonies and shows off his ability to function freely in any of style of picking, from the snazzy jazzy licks on “Brother John” to the screaming slide on “Cornfield.”

But before we take any of this too seriously, in the famous words of Hound Dog Taylor, “Let’s have some fun!”