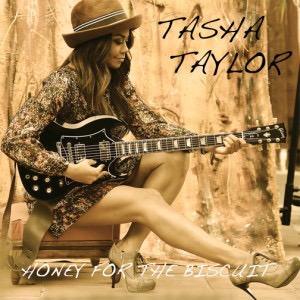 “This record has a lot of relationship heartache, missteps, and some confusion. I think it’s about searching for something via someone.”- Tasha Taylor

Ruf Records recording artist Tasha Taylor has always carried the torch for Soul and Blues. Now, with her dazzling third album, Honey For The Biscuit, set for an March 18 release, the US singer/songwriter/musician unveils thirteen new songs that push her beloved genre into the spotlight. “I’m carrying on the next generation of rhythm, blues, and soul,” says Tasha. “Bridging the gap between one generation and another; it’s my family business – as well as my passion.”

As the daughter of R&B trailblazer and Stax giant Johnnie Taylor, Tasha’s genealogy is auspicious. And yet, while lesser talents might trade on that hallowed surname, Honey For The Biscuit is a personal statement bearing her unique thumbprint. “I started writing this record three years ago,” recalls the singer/producer, “and I wrote most of the songs on my guitar.

Recorded in LA, Tasha Taylor was joined in the studio by a core all-star band. Tasha (Vocals, guitar, percussion), Nathan Watts (bass), John Notto (guitar), Jon Taylor (guitar), Don Wyatt (piano/organ), Munjungo Jackson (percussion) with the following on drums; Gerry Brown, Ronald Bruner, and Stanley Randolph. Then to round it out, a full brass section with Jamelle Williams, Matthew DeMeritt, and Lemar Buillary to make Honey For The Biscuit a thrilling reboot of the great American genres, taking in the soul, funk and every shade of blue.

“I always bring a soul element,” notes Tasha, “and this record also has a touch of Nashville, which was a new thing for me to explore. Three songs were written with Tom Hambridge and Richard Flemming, (“Leave Dog Alone,” “How Long” and “Weatherman”) and overall this record has more of my blues side exposed, from subject matter to musicianship. It also inspires some dancing, so be ready for that!”

Special songs dovetail with special guests. There are the light-footed guitar lick and gang chants of “Family Tree” (featuring Keb’ Mo’). The handclaps and doo-wop refrain of Little Miss Suzie (Robert Randolph guesting on lap steel). The full-throttle, funky ode to a cheating man on “Leave That Dog Alone” (Samantha Fish supplying fiery guitar/vocals). The brassy belt of “Same Old Thing” (Tommy Castro at the microphone) makes Tasha Taylor smile, “I got very lucky and got some great friends to play, nice honey for my record.”

Even amongst that blues royalty, it’s Tasha’s neck-tingling vocal that demands top billing, her raw delivery digging to the emotional depths. The lyric sheet, meanwhile, opens up her diary from a period of upheaval. “It’s been nice looking back on what is essentially a snapshot of my life,” she admits, “and realizing what you can learn from your experiences. There’s a lot of testimonials about dealing with and searching for stuff, about love, lust, and life. I think I’ve come through a lot of stuff when I hear this record, and I’m glad to have those lessons in my pocket.”

It’d take more than a broken heart to break her stride. Flick through her backstory and it’s clear that Tasha Taylor hasn’t just inherited her father’s talent, but also his tireless work ethic. Though raised in Dallas, Texas, her de facto childhood home was the tour bus. “I didn’t have a lot in common with other kids’ family lives,” she reflects. “On the road, that’s where I grew up. It was a very different job for one’s dad to have, but I learned the most from watching him on stage from the wings.”

For a period, Tasha Taylor seemed bound to a different road, as she moved north to study drama at Boston University, before taking featured roles in hit TV shows including “Ugly Betty” and “House”. It’s a parallel career that continues to thrive, but the music in her DNA could not be denied, so Tasha went on to compose original soundtracks for shows like “Men In Trees” and “Lipstick Jungle”, before making ripples with her solo debut, 2008’s Revival.

Three years later, that album was followed up by Taylormade: a whip-smart set of Tasha Taylor’s self-penned material that tipped its hat to her late father with a spring-heeled cover of “Who’s Makin’ Love.”

“He was an inspiration and a special talent,” she reflects. “I remember being on the road with my dad and if I was worn-out or sick, he’d say, ‘You don’t have to sing if you don’t feel good – or you can be a trouper.’ I guess I always choose to be a trouper.” True to Taylor Senior’s advice and example, Tasha Taylor has earned an international reputation for high-velocity shows that leave it all on the stage and lift her audiences above their troubles. “It’s very high-energy and deep emotion,” she explains. “Onstage, I feel the soul of the music, and I put my everything into my performances because of that. I love to see the audience connecting to the emotion of the music.”  In 2016, Tasha Taylor hits stages across Europe and America armed with Honey For The Biscuit: the third breakout record that realizes her potential spreads the word about the genre she has always championed and carries that magical surname into a bold new age. “If one person leaves with a new favorite song,” she considers, “then I’m happy…”