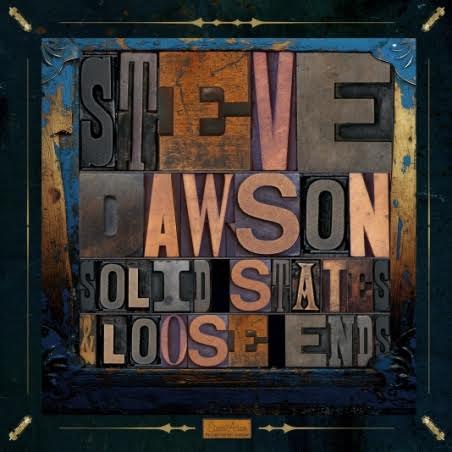 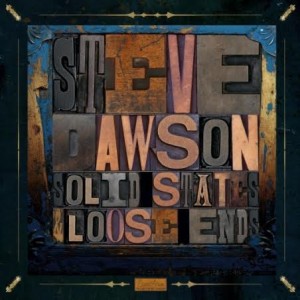 “For this album, I wanted to assemble a great band, dig into the material and just play,” Dawson recalls about the sessions. “I rounded up a great Canadian rhythm section – John Dymond and Gary Craig, who play with Colin Linden and countless other artists – and we set up shop for a few days and let it fly. I wanted to expand on some of my previous work and feature the slide guitar in a big way, but in more of an electric context this time. After recording my last album completely solo, it felt like a good time to get more textured and grooving. I had written a batch of new songs over the last four years that I felt good about and thought they would fit well with these players. It was a very easy session and the music flowed.”

The 14 tracks on Solid States and Loose Ends run the gamut within the roots music spectrum, touching bases in blues, folk, Americana, gospel and soul genres. Throughout it all, Steve Dawson’s wizardry on anything with strings shines brilliantly, paralleling what one earlier reviewer called him: “… a Canadian version of Ry Cooder… his fine slide guitar and storytelling, everything seeming to flow effortlessly.” – (Toledo Blade)

This is the most beautifully considered, composed and performed album of Steve’s career, and as the title suggests, it is an album that sums up and gathers together the many musical influences and lyrical themes that he has been exploring for more than two decades now. It’s also the first deeply personal recording Dawson has issued since leaving Vancouver for Nashville a few years back. With its sweeping scope, the expansive sound of Solid States and Loose Ends stands in stark contrast to the spare elegance of 2014s Rattlesnake Cage, his critically-acclaimed solo acoustic instrumental album.

Playing with all these special musicians set the bar high for the recordings, and Dawson certainly rose to the occasion. Whether playing acoustic or electric, slide or pedal steel, every performance on the album showcases the warmth and fluidity of his style. Rarely has the prodigious player coaxed such rich and evocative tones out of his instrument or performed with the creativity and authority that he does here.

Another part of the story of Solid States and Loose Ends has to do with how much Dawson has grown as a singer. His delivery has never been as nuanced or unhurried as on these evocative new songs, and when he sings with the exciting Keri Latimer or the sublime McCrary Sisters, it’s hard to imagine ever wanting to listen to anything else.

A naturally curious musician with more than a bit of mad scientist in him, Steve Dawson is constantly experimenting with new instruments, recording equipment and guitar sounds. To create Solid States and Loose Ends’ unique aural palate, he set his collection of small vintage amplifiers on full throttle to create the kind of overdriven sound that can only arise when low-wattage tube gear is pushed to the edge. With stinging slide guitar work reminiscent of 1970s Ry Cooder albums, and the intimacy, spontaneity and warmth one might hear on records produced by Joe Henry or T-Bone Burnett, Solid States and Loose Ends is a natural extension of the dark themes and film noir overtones explored on his 2011 CD, Nightshade, Dawson’s last full-band album. While he continues to reference the language of traditional blues and country music, Dawson has developed a rich lyrical voice of his own that is as influenced as much by Mickey Spillane and Otto Preminger as by Robert Johnson or Blind Willie McTell. Standout tracks like “Rose’s Blues,” “California Savior” and the wrenching “Final Words” are among the most accomplished songs Dawson has ever written; and “On Top of the World,” sounds like a rediscovered lost country swing classic from 1935.

“I consider ‘Final Words’ to be the centerpiece of the album,” Dawson says. “It’s got elements of soul and blues, but it really builds a song that revolves around the idea of isolation and loneliness and then builds it up to a loud crescendo before crashing back down to nothing. I wanted to play with dynamics with that and I really worked on making the guitar sounds cool on that one.”

But, fans of his edgy, vintage guitar sounds won’t be disappointed; he still loves to get down and dirty on the guitar as he does on the Riley Puckett classic, “Monkey on My Back;” or blasting through a greasy rendition of Joe Tex’s “You Got What It Takes.” Dawson also tackles Gid Tanner and the Skillet Lickers’ “The Henhouse Door” with a captivating acoustic solo slide guitar performance that is sparse yet fluidly funky.

Two other songs stand out to him, personally: “‘Leave My Name Behind’ was a tune that came very quickly and I wanted to incorporate some gospel elements into a song that really had nothing to do with gospel material. I’ve always listened to a lot of that music from the ‘30s and ‘40s, so it seemed natural for me to go that way.

“‘Loose Ends’ is a song I’ve been playing for a couple of years, and the McCrary sisters really bumped up the energy on that a lot. I really wanted to jam a bit on this album, and that song had some nice moments between us as a band, I think. It conjures up Little Feat, I guess in a way, and I’ve always loved their music.”

Steve Dawson will support the release of Solid States and Loose Ends with a series of shows both locally and in Canada. He’s currently performing a February Tuesday night 7-10 PM residency at Nashville’s Soulshine Pizza Factory, 1907 Division St. (http://soulshinepizza.com/).

To add to his visibility, Dawson is also launching a podcast around the same time as the album’s release. He describes the show’s format as “long-form interviews with interesting musicians and producers called ‘Music Makers and Soul Shakers.’ I’m banking up all the interviews right now, and will release them one a week starting in March. Guests so far include John Hammond, Tim O’Brien, Bill Frisell, Gurf Morlix, Muscle Shoals bassist David Hood, Stephen Hodges, Fats Kaplin, Mary Gauthier and Oliver Wood (Wood Bros).”