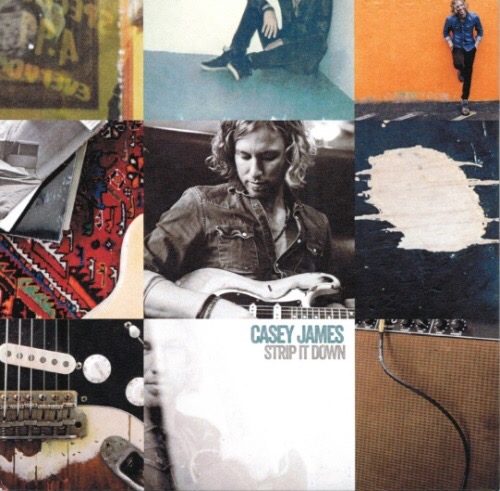 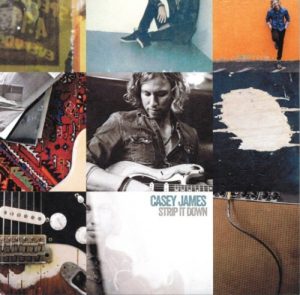 NASHVILLE, TN –Former “American Idol” Finalist Casey James Returns to His Texas Blues Roots on Latest Album, Strip It Down. “All I want to do is play music,” says singer/guitarist, Casey James. “Stripping it back to just me making a record of music that I love was a huge stepping stone in my life.” Released June 9, Strip It Down, his new album produced by Grammy-winner Tom Hambridge and featuring a guest duet with the legendary Delbert McClinton, does just that.

It’s titled Strip It Down because it’s exactly what Casey James did – shed off the layers of stylized artistic clothing that he’d been given in those other public ventures to find the real artist underneath, a guy with a convincing, smokey vocal quality and a burning, lyrical skill with a guitar.

Recorded at Sound Stage Studio and The Switchyard in Nashville, Strip It Down is a glorious return to the blues and roots music Casey James grew up on in his native Texas, and was a major influence in both his singing and guitar playing. “This music has been a lifetime in the making for me,” Casey says. “If you listen close enough, you can hear my heartbeat; the thing that keeps me alive. It’s all here. This album has been a healing process for me. To truly share my heart and passion with the world in an honest way is the best feeling I’ve ever felt.”

It’s not often that the blues gets summarized with a happy platitude, but when Casey James inserted the phrase, “Every sunrise on another day is another chance to smile,” into the song “Hard Times, Heartaches & Scars” on his new album, it was a hard-won truth. James is familiar to many as a finalist on season 9 of “American Idol,” and familiar to still more as a country artist who notched a Top 15 single with “Crying on a Suitcase.”

But in Strip It Down, James comes into his own by following a simple plan: being himself. Instead of following the expectations of TV producers or the game plan of a well-oiled record company, James collected 13 songs he’d written or co-written (plus a soulful take on Little Willie’s John’s “Need Your Love So Bad”), holed up in a Nashville studio with a trim, crackerjack band and hammered out the bulk of the album in a scant four days.

“There are no tricks here; no auto-tune, no grid, no Midi adjustments,” he proclaims proudly.

The music Casey loves is the blues. Between his shrewd playing and exuberant singing, the influences of guitar players Tab Benoit, Doyle Bramhall II and Freddie King are highly apparent in Strip It Down, which folds-in a variety of styles, all connected directly to that blues base. Casey announces his roots entry with the dramatic blues/rock of the opening track, “All I Need.” Then, Grammy-winner Delbert McClinton joins him on a raucous bit of Texas roadhouse swagger titled “Bulletproof.” From there, the album courses through the light country swing of “Stupid Crazy” (joined by Bonnie Bishop on vocals), the spacious old-school R&B of “Different Kind of Love,” and the gutbucket closer “Fight You for the Blues.”

Growing up in Cool, Texas, a dusty town 45 miles west of Fort Worth, his destiny was laid out for James at the age of 13, when he got his first guitar. It became a constant companion, a channel for his emotions, as the six strings lay easy in his hands.

“I got pretty proficient fairly quickly, but mostly because I couldn’t put it down,” James remembers. “I don’t ever remember a time where practice felt like practice.”

It was that natural. James formed a band and hit the Texas club circuit, a collection of venues just big enough that it can keep a musician going for years. The band was in such high demand that one year he played a staggering 364 days. Clearly, he was talented – and more than ready to work. He mixed a few originals in with cover songs, played a mean guitar and sang with conviction. But he was persuaded by a family member that a run on “American Idol” might put him on better financial ground.

“I was at the best place in my life,” he recalls. “I was gigging every day. But I was struggling to try and make enough money to make a real record. Had I not done ‘Idol,’ I probably would be still struggling, so I consider it a blessing.”

It also became a bit confusing. The contract required him to stop playing clubs from the time he auditioned until the season concluded roughly nine months later. The schedule frequently involved 20-hour work days secluded from the world he knew, and he bent a lot of directions stylistically to fit into the show’s format. The work paid off – he placed third that season (2010) and landed the record deal. It was a country contract, not entirely in alignment with his influences, but it overlapped enough that he took the deal.

The next four years were a whirlwind, as James threw himself into promotion, meeting radio programmers, writing with some of Nashville’s best composers and opening for the likes of Taylor Swift, Alan Jackson and Sugarland. He experienced surreal stardom, but that came with music that merely hinted at the real Casey James. When he got off the ride, he found himself in a different place than he’d started.

“You go from zero to hero overnight, and so people see you differently,” James says. “So the person I was died. That person no longer existed.”

If it was going to be possible to resurrect that person, he knew only one way to do it. So he wrote. He launched into that phase with no real plan, just a passion for self-expression.

“It started as, ‘Man, I just need to write. I need to be able to do this for my own sake,’” he says. “I needed to just write music for me, for the sake of writing something that I enjoy singing and playing.”

The soulful “Supernatural,” the breezy ballad “Stupid Crazy” and the honking “I Got to Go” all came early in the process. He wrote them on his own, and he realized the time he’d invested in Music City had brought him to another level in his craft. James subsequently booked a series of writing appointments with some of Nashville’s finest, including one with Brice Long and Terry McBride, co-writers of James’ first single, “Let’s Don’t Call It a Night.” At the end of their session, they recommended he do some writing with another friend who had a strong affinity for the blues, somebody named “Tom.”

James got an appointment with him, and was astounded to discover that “Tom” was Tom Hambridge, a drummer, songwriter, and producer whose work he’d long admired. Hambridge had a hand in albums by Buddy Guy, Foghat, Keb’ Mo,’ and Susan Tedeschi, and his grounding in the blues and roots music was spot-on for where James was headed.

In their first co-writing session, James and Hambridge penned a bristling acknowledgement of sufficiency, “All I Need.” Two weeks later, they reconvened and authored “Killin’ Myself,” a snarling rocker that loosely encapsulates the roughest emotions from James’ experience with the music business.

The two were so in sync that before that second writing appointment was over, Hambridge was already plotting out how best to produce James’ album. And he did. Hambridge enlisted guitarists Pat Buchanan and Rob McNelley to back James up on guitar, bass player Tommy McDonald, and keyboard player Kevin McKendree, and they captured Strip It All Down mostly live in the studio, James singing and playing with the band and nailing most of the songs in three takes or less.

James funded it all through a one-month Kickstarter campaign, asking his fans to invest in the next step on his musical journey. They came through in a big way, delivering more than double his original goal. It served as a reminder that even when his path had taken down difficult roads, he’d made a strong connection with an audience that understood his creative ambitions.

Strip It Down sounds distinctly different from the work he did in his previous recording deal. And it’s much more forceful than the artist America first saw on “Idol.” As foggy as those periods in his life became, they were important steps in Casey James defining himself – recognizing the music that brought him joy and accepting the talents that make him able to deliver it.

“I always thought of myself as a guitar player that can sing, but I realize now that that’s not the case – I feel as confident and comfortable with my vocals these days as I do with my playing,” he says. “My perception of who I am has changed.”

Strip It Down threatens to change America’s perception of him, too. The blues is all about struggle, and James endured a major one as he lost a piece of himself in the spotlight. The album helped him renew his original intentions – in essence, to find himself again. And he delivers it with a passion and experience that are required to play the blues with authority.

“For the longest time, I always played with my eyes closed because music is so personal to me that I felt like I was naked – I’m putting all of everything that I am in every note,” James reflects. “I don’t close my eyes so much anymore because I’ve become more comfortable with being naked, so to speak, in front of people. I became OK with opening my eyes and engaging with people and really experiencing that moment with them.”

It’s why Strip It Down is such an apt title. All the outer layers had to come off for James to rediscover what he has to offer; to rekindle his reason for being – and to use it as a means of connecting.

“If you were to give me two options – one to have a shot at being famous, but it might mean I never play music again, or the other, to play every single night at bars, I would immediately choose option B,” he says. “Because I want to play music.”