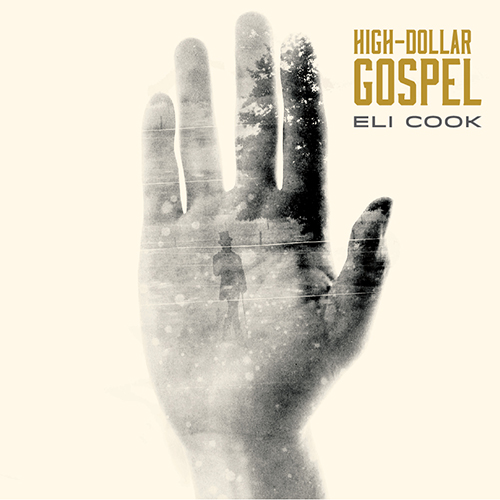 “Everybody knows the story of the crossroads, where blues guitarists go at midnight to trade their souls to the devil for musical prowess. It’s just a myth, of course, but if it were true, firebrand Eli Cook could have bragging rights, as his scarifying solo-country blues chill like a hellhound on your trail.” –  Guitar Player (2007)

Eli Cook is a mystifying soul. He’s a keen observer, a provoking thinker and has swagger.

All under that messy blonde hair is a passionate heart with fingers of silver and gold that recalls John Lee Hooker, Chris Smither, and Chet Atkins, mixed in with a dirty, grungy sound. It’s clean playing mind you; it’s just his fingers are covered in the dirt left over from the crossroads.

High-Dollar Gospel preaches a high voltage bolt to your ears and shakes you loose.

Coming from Albemarle County in Virginia at the Foothills of the Blue Ridge Mountains, Eli Cook grew up listening to the blues, country, classic rock and alternative rock. He grew up with no TV and radio shows like Prairie Home Companion were his Saturday night entertainment. Life moves slowly in this rural area of the world giving him time to hone his skills with his voice and guitar chops. At 18 he was opening up for B.B. King – a few years later he’s playing in Canada – and then the next week he’s blending in with his hometown locals. Talent like this shouldn’t go unnoticed, and Eli has been smoldering in the underbelly for far too long.

“It’s what was around me, and I just tried to pick up on everything and everybody, including Doc Watson and Chet Atkins. In fact, hearing Chet fingerpick made me realize I didn’t need a band.” (Source: Guitar Player 2007)

Produced by Eli Cook at Full Moon Recording Studios in VA, High-Dollar Gospel opens up with a slow bang with “Trouble Maker” – taunting and questioning his muse to join him.  Acoustic picking and slide drive the classic hoedown backs the cautionary tale “The Devil Finds Work.” The haunting “Mixing My Medicine” contains the cavernous sound of a detuned custom 12-string guitar; an instrument played famously by Leadbelly and Blind Willie McTell.  Cook slows down Muddy Waters’ melancholy “Can’t Lose What You Ain’t Never Had” into a terrifying, heart of darkness lament, his voice reaching a bottomless depth of sorrow. The orchestral 12-string guitar underscores the metaphoric boast of “King Of The Mountain” that shows off Eli’s huge growl of a voice with its anthem-like chorus is a showstopper.

“Got my spirit vision mama, she’s callin’ me

when I’m high, lordy people, don’t nobody mess me round

I seen every kind of evil; got to get on out this town” – King Of The Mountain

High-Dollar Gospel isn’t all balls to the wall, for his take on “44 Blues” is a brilliantly inventive version of Howlin’ Wolf’s classic propelled by his tapping foot. Dylan’s “I’ll Be Your Baby Tonight” is made less declamatory than the original as Cook slows and lightens his approach without losing the romantic heat. He again flashes his slide accompaniment skills on the jaunty “Month Of Sundays” in a poetic entreaty to a paramour. (Click on Eli’s face for an acoustic performance of “Month Of Sundays”)

Eli Cook explains his album title as “I was brainstorming ideas that would evoke the imagery of the American South. The phrase ‘high-dollar’ is an old one, and ‘gospel’ is the Southern church music that brought us Ray Charles, Aretha Franklin, Sister Rosetta Tharpe and countless other iconic musicians. The two phrases together can have several connotations, but the one I think of is the feeling of disillusionment that seems to be more and more pervasive. I think a lot of young people feel a sense of apathy and a loss in direction, generally speaking. People need inspiration, and it seems like that is becoming harder to come by.”

The growl in his voice shows off an emotional connection to the music as a tool rather than decoration, and with your eyes closed, you could be listening to Howlin’ Wolf or Chris Cornell. On Aug. 18with High-Dollar Gospel, Eli shows you what you can’t imagine, something so strong and melodic, so don’t be afraid to look and listen.

“Artists often talk about the blues as a living and growing thing and not just a style of music ﬁt for museums. Cook puts that theory into practice and moves things forward.” – Slant Magazine

Back away the concrete is buckling.

Photo Credit for below: Jill Kettles