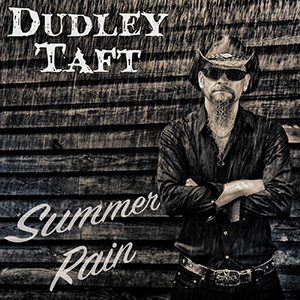 Summer Rain is his fifth studio album, consisting of 11 all-original songs, and dedicated to the men and women of the armed forces who accept tours of duty in far-away places, leaving their families behind. A running theme of anguished separation and endless toil run through the album.

“I have the greatest respect for those men and women who serve in the military, especially those who are deployed halfway around the world in the hot spots of sectarian conflicts,” Taft says. “This album pays tribute to these soldiers who sacrifice much of their lives to defend freedom and to support their families. The separation from their loved ones and significant others must weigh heavy on their hearts.”

All of the basic tracks on Summer Rain were recorded in Taft’s own studio, which he purchased from the legendary Peter Frampton in 2013. Appearing for the third time with Taft is Rock ‘n’ Roll Hall of Famer Reese Wynans, who played keyboards for Stevie Ray Vaughan. “Reese always has the best instincts and manages to take each song up a notch,” Taft comments. “Check out the vibe he creates on the track ‘Live or Die!’ Jason Patterson plays drums on all but two tracks, with Mike Tapogna on the skins for the other two. Newcomer Kasey Williams handles the bass duties, except for three songs played by long-time collaborator John Kessler. My daughter Charmae adds some backing vocals to the title track song.”

A self-confessed guitar gear fanatic, Taft used several of his newly acquired mid-sixties Fender amps on most of the songs, along with the Tonehunter TNT to fill out the sonic palette.

The opening track, “Flying on Love,” is a bit of a departure sonically. “I reached for my fuzz pedal and layered guitars over a couple of killer drum loops and had Jason play on top of those,” he says about the recording session. “The title track, ‘Summer Rain,’ clocks in a little under six minutes, telling the tale of laboring miserably far from home under the hot sun hoping for the rain to wash away the pain and cool things down.”

“Edge of Insane” is a lighter take on a jilted lover, while “Pistols at Ten Paces” has a hint of political commentary, uncharacteristic for Taft.

The final track, “Find My Way Back Home,” winds up the stories on the album, with the protagonist finally returning home after a long separation from his family.

Dudley Taft’s music career began in high school when he founded the band Space Antelope with friend Trey Anastasio (of Phish). He then expanded his creative juices as a guitarist and songwriter with two prominent Seattle bands of the early 1990s, Sweet Water and Second Coming. Both had major label deals and Taft enjoyed success with songs on the radio, in movies and television.

In 2007, Taft started his solo career by playing songs from Freddie King, ZZ Top and Albert Collins, to name a few. His first solo effort, Left for Dead, was released in 2011. Deep Deep Blue followed in 2013, and along with Left for Dead, was released in Europe on the M.i.G. label. Screaming in the Wind debuted in 2014. His last album, Skin and Bones, was released in 2015 and resonated both with blues and rock critics and radio station deejays. It also yielded several widely seen videos, including “Lonesome Memphis Blues,” and a killer take on Johnny Winter’s “Leland Mississippi Blues,” both filmed on location.

Dudley’s music can be heard on most every streaming site, Sirius XM Radio and your favorite local blues show. His music has been featured in movies and on television, most notably “The Sixth Sense” and on “That Metal Show,” “Gene Simmons’ Family Jewels” and many more.

Dudley Taft recently returned from an extensive European tour, which included him playing before a crowd of over 10,000 people at a Polish music festival.

CD Dedicated to America’s Men & Women in the Military